AFP) – Chelsea manager Jose Mourinho has been fined £8,000 ($13,400, 9,700 euros) and warned about his future conduct after being sent off at Aston Villa last month, the Football Association announced on Thursday.

A statement on the FA website said: “Chelsea manager Jose Mourinho has been fined £8,000 and warned as to his future conduct following an independent regulatory commission hearing.” 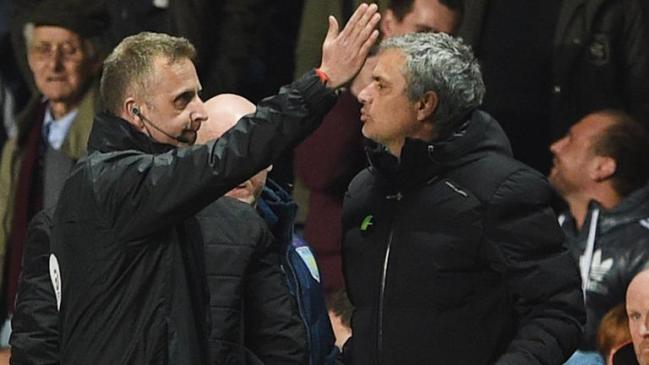 Mourinho requested a personal hearing with the FA after he was charged with improper conduct for being sent to the stands by referee Chris Foy during the dying stages of a 1-0 loss at Villa Park in the Premier League.

“Mourinho denied a breach of FA rule E3 in that his behaviour in re-entering the field of play and approaching the match referee in an attempt to speak to him … amounted to improper conduct,” the FA said.

“However, the charge was found proven at a personal hearing on Wednesday, April 9.”

Mourinho was sent off following a touchline melee sparked by an ugly foul on Karim El Ahmadi by Ramires that earned the Chelsea midfielder a red card. His team-mate Willian was also sent off during the game.

The Chelsea manager claimed that he had only gone onto the pitch to act as a peacemaker, but he was promptly sent to the stands by Foy.

Mourinho has been virulent in his criticism of Foy since the game, which was the first of two consecutive defeats that have jeopardised Chelsea’s bid for the Premier League title.

“What happened in the defeat against Villa I never learn, I never accept,” he said recently.

“Somebody was very successful in putting a hurdle in front of us. And we crashed the hurdle against Aston Villa, and we lost. Villa was not a normal football match and we always hope that football matches are normal.”

Mourinho was also sent to the stands during a 4-1 win at home to Cardiff City last October, for which he was fined £8,000.

Chelsea are currently two points behind leaders Liverpool in the league table and on Tuesday secured a place in the Champions League semi-finals with a 2-0 win at home to Paris Saint-Germain.