NIGERIANS AND THEIR FIRST LADY IN COURT…QUESTIONS NIGERIANS MUST ANSWER!…featuring things you never knew about the FIRST FAMILY. 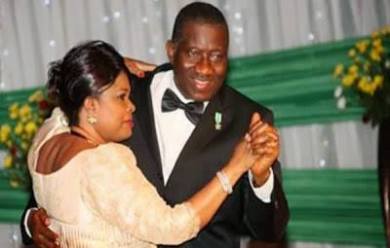 “We first met at the Rivers State College of Education, Port Harcourt where I was a student. He was my Biology lecturer.Later, he left for university of Port Harcourt to pursue his PhD but he was already attracted to me and later we both fell in love and got married.”

She is widely criticized for her poor grammar. She is currently been crucified in the social media for her recent outburst on national television where she lost control of her emotions crying: “Chai, there is God oh” with a heavy Nigerian ascent.
Africa Thisday asks Nigerians: What is her crime? Is been original and real a crime in Nigeria? Why have Nigerians chosen ‘fashion’ instead of ‘passion’? Has the west so enslaved you that you have lost that African factor-Respect? Isn’t pidgin English the Nigerian thing? When did good English become a yardstick to measure good leadership? Is English your mother tongue? Does the English man speak your language let alone been fluent in any African language? Africa Thisday asks!Answers wanted!

This entry was posted in Uncategorized and tagged Boko Haram, Bring back our girls, Goodluck Jonathan, patience Jonathan on chibok girls.