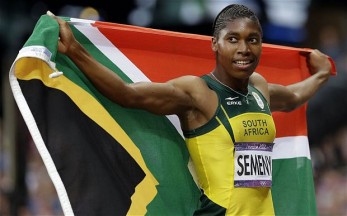 South Africa’s Olympic silver medallist Caster Semenya has reportedly paid lobola (bride price) for athlete Violet Raseboya.
Africa Thisday can authoritatively report that Caster has apparently sent her elders to Violet’s family in Polokwane to negotiate lobola – as both athletes wanted to settle down.
It is understood they went to Violet’s family two weeks ago.

“Caster’s dad, ntate Jacob Semenya, was accompanied by other family members to negotiate lobola,” said a source.
“Caster had made her intentions clear that she wanted to take Violet as her other half.
“Both families were happy to negotiate lobola and Caster’s family paid R25 000 to have Violet as their makoti.”
A popular South African tabloid, Sunday Sun has also reported that preparations for the wedding are underway.

A friend of the couple said Caster and Violet are inseparable.
“They really love each other and this is a bold step for them. They have a bright future together and I believe once they have settled down, they will achieve more in their careers.”
In a recent interview, Caster was asked which three items she would take if her house was on fire.
She revealed her undying love for Violet and stated that she was her soulmate for life and that is the first person she would think of.

This entry was posted in Contemporary news and tagged CASTER SEMENYA, Violet Raseboya..