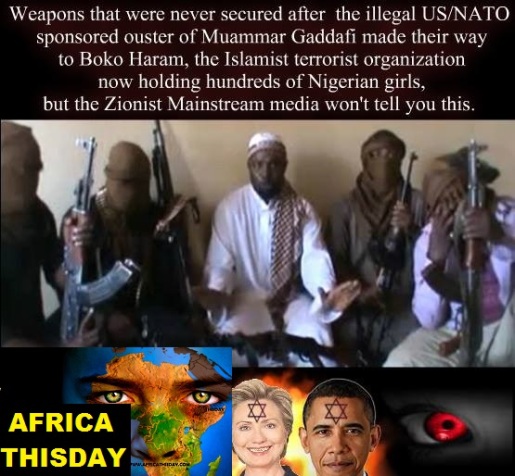 A copy of the paper’s report is reproduced below:
“THE United States of America ignored requests by Nigeria for intelligence information and aid to help fight the militant Islamist terrorist group Boko Haram last year, reports have revealed..

Two American newspapers, ABC News and the Daily Beast, weekend, accused the Obama administration of failing to reply to requests by lobbying firm Patton Boggs on behalf of the Nigerian government.

Last weekend, US Senator John McCain told CNN, “We should have utilized every asset that we have, satellite, drones, any capabilities that we had to go after them. We didn’t have to wait until a practically non-existent government of Nigeria gave us the go-ahead before mounting a humanitarian effort to rescue those 276 abducted girls.”

But the ABC and the Daily Beast noted that the “revelation comes as many in the administration have blamed the Nigerian government for their rationale behind why the United States government was tardy in designating Boko Haram a Foreign Terrorist Organization.”

According to the ABC News report: On behalf of Nigerian National Security Adviser, Muhammadu Sambo Dasuki, Garrett requested information on Boko Haram activities derived from intelligence, surveillance and reconnaissance overflights of northeastern Nigeria’s Borno state. Patton Boggs also asked for non-lethal protective hardware to be donated to Nigeria such as mine-resistant armored personnel vehicles, night vision goggles and communications equipment from Iraq and Afghanistan stockpiles left over from U.S. withdrawals from those warzones.” Vanguard reported.
America’s failure to respond to Nigeria’s request in 2013 further confirms Africa Thisday’s theory that Boko Haram may not be unconnected with the west.

One thought on “BOKO HARAM AND OBAMA: THE SAD NEWS.”

[…] reported an unpopular conspiracy theory linking the Obama’s administration with Boko Haram.(Click here for the full text of the report). However, a Canadian Journalist, Fred Dardick has published yet another unpopular fact exposing […]