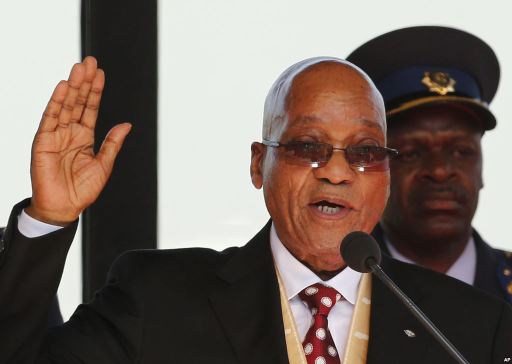 PRETORIA — South African President Jacob Zuma was sworn in for a second five-year term Saturday at a pomp-filled event attended by thousands from across the country, with dozens of foreign dignitaries from around the African continent also on hand.

But on the streets, South Africans expressed mixed opinions about five more years in office for a leader who has been embroiled in corruption scandals since first taking office.

Zuma took his second oath of office during a spectacular and colorful ceremony at the Union Buildings in Pretoria, as dozens of sitting heads of state, over 100 ambassadors and thousands of South Africans observed.

The official ceremony began with Zuma taking the oath of office in front of the country’s chief justice, Mogoeng Mogoeng. He vowed to “be faithful to the republic of South Africa, so help me God.”

The military paid tribute with a 21-gun salute and a series of aircraft flyovers, demonstrating its readiness to protect the president and the nation at large.

In his inauguration speech, Zuma said his second term would “involve the implementation of radical social-economic transformation.”