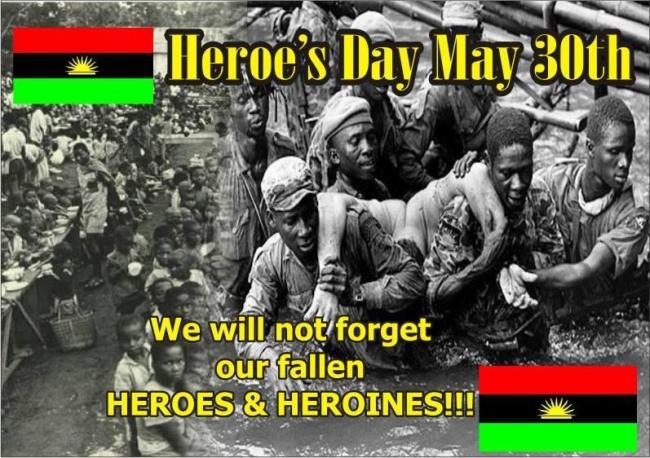 Biafra, officially the Republic of Biafra, was a secessionist state in south-eastern Nigeria that existed from 30 May 1967 to 15 January 1970, taking its name from the Bight of Biafra (the Atlantic bay to its south).The inhabitants were mostly the Igbo people who led the secession due to economic, ethnic, cultural and religious tensions among the various peoples of Nigeria. The creation of the new state that was pushing for recognition was among the causes of the Nigerian Civil War, also known as the Nigerian-Biafran War.

After two-and-a-half years of war, during which about 2 million Biafran civilians had died in fighting and from famine, Biafran forces agreed to a ceasefire with the Nigerian Federal Military Government (FMG), and Biafra was reintegrated into Nigeria. Many have described this reintegration as a forced marriage between two nations who have nothing in common.

on the morning of May 30th 1967,47 years ago, the late General Chukwuemeka Odumegwu-Ojukwu declared the sovereign Republic of Biafra and a national anthem titled “Land of the Rising Sun” which was composed by Dr. Nnamdi Azikiwe was sung.