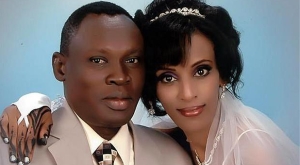 A Sudanese court on Monday ordered the release of a 27-year-old woman who was sentenced to death last month for allegedly converting from Islam to Christianity, the state news agency said.

The case of Mariam Yahya Ibrahim, who is married to a Christian American, triggered an international outcry. Britain had last month summoned the Sudanese charge d’affaires in protest at the sentencing.

“The appeal court ordered the release of Mariam Yahya and the cancellation of the (previous) court ruling,” Sudan’s SUNA news agency said. A government official had told Reuters on May 31 that Sudanese officials were working to release Ibrahim.

Ibrahim’s lawyer Mohaned Mostafa said she has already been released and sent “to an unknown house to stay at for her protection and security.”

“Her family had been threatened before and we are worried that someone might try to harm her,” Mostafa told Reuters.

Ibrahim was sentenced to 100 lashes for what it deemed her adultery for marrying a Christian. She gave birth in prison to a daughter, her second child by her American husband Daniel Wani.

This entry was posted in Uncategorized and tagged Meriam Yehya Ibrahim Isha, Sudan.