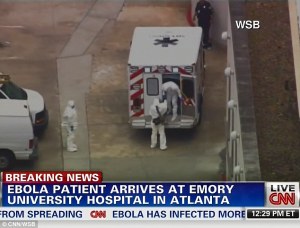 A few American scientists exposed mice to Ebola Virus and then obtained the antibodies in a serum which the mice produced to fight against the invading Ebola virus.

CNN said “The medicine is a three-mouse monoclonal antibody, meaning that mice were exposed to fragments of the Ebola virus and then the antibodies generated within the mice’s blood were harvested to create the medicine. It works by preventing the virus from entering and infecting new cells.”

The serum is stored at Subzero temperature.

Testing of the serum:

Human Application:
Sometime last month (July 2014), two American doctors, Kent Brantly and Nancy Writebols who were taking care of Ebola patients in Liberia were reported to have tested positive to Ebola virus. The American scientists who obtained the serum secured permissions/consents to treat Kent Brantly and Nancy Writebols with their serum. According to CNN, the experimental serum “stored at subzero temperatures, reached the hospital in Liberia where Brantly and Writebol were being treated Thursday morning. Doctors were instructed to allow the serum to thaw naturally without any additional heat. It was expected that it would be eight to 10 hours before the medicine could be given, according to a source familiar with the process. Brantly asked that Writebol be given the first dose because he was younger and he thought he had a better chance of fighting it, and she agreed. However, as the first vial was still thawing, Brantly’s condition took a sudden turn for the worse. Brantly began to deteriorate and developed labored breathing. He told his doctors he thought he was dying, according to a source with firsthand knowledge of the situation. Knowing his dose was still frozen, Brantly asked if he could have Writebol’s now-thawed medication. It was brought to his room and administered through an IV. Within an hour of receiving the medication, Brantly’s condition dramatically improved. He began breathing easier; the rash over his trunk faded away. One of his doctors described the events as “miraculous.” By the next morning, Brantly was able to take a shower on his own before getting on a specially designed Gulfstream air ambulance jet to be evacuated to the United States.”

Brantly is currently been treated in Emory University Hospital facilities in Atlanta and he is reported to be “miraculously” improving. He has very high chance of been cured. Alas, America has kept this a top secret.

In as much as I celebrate the courage of the scientists in obtaining the serum, I also give them a thumps down for limiting the use of the serum to only America/Americans. If I were them, Africa would have access to this serum as soon as possible but that would mean minimum financial profit to the inventors/investors but maximum health care to the patients. This is another reason why African scientists must be challenged to solve this Ebola puzzle by ourselves and for ourselves.

I want to read in the newspapers that African scientists have also obtained so much quantity of the said serum, secured necessary certifications and commenced treatment of Ebola patients. We shouldn’t let our irresponsibility rob our brothers and sisters their precious lives by a ‘curable’ disease. Its time to prove your Bachelor of Science Degree. Go back to the Laboratories. It’s ‘Operation Cure Ebola’.

About the Writer:
Charles Awuzie holds a degree in Biochemistry, a preacher of the gospel of Jesus Christ and blogs from Johannesburg. CLICK HERE TO ORIGINAL TEXT.

This entry was posted in Uncategorized and tagged Atlanta, Ebola.