EXPOSED: WHAT YOU DIDN’T SEE IN THIS PICTURE. 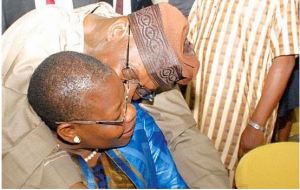 Nigeria’s former President, Olusegun Obasanjo was recently caught on camera in a disturbing posture with leader of #BringbackOurGirls Campaign, Mrs. Oby Ezekwesiri during the launch of the former’s controversial autobiography, My Watch.

Foremost, it is unAfrican for a man to hold another man’s wife in public this way. In Africa, we have respect for married women.

But here is the question nobody is asking, Why did Obasanjo close his eyes while giving Mrs. Oby the so called ‘holy’ peck?

Or is Africa Thisday the only one who is noticing OBJ’s closed eyes?