AirAsia: Comments from People Who Used The Airline is Shocking

A social media commentator with the username ‘flyingjack’ had this to say about AirAsia:

“Ever since I flew Air Asia I’ve been sceptical about their maintenance standards. I flew with them twice (from Bangkok to Chaing Mai over and back in 2009) on board one of their Boeing 737 (300 series). The overall condition of the plane (inside as well as outside) was very neglected. I remember that one the trolleys hadn’t been secured properly and came racing through the cabin from the rear galley as we landed. Here’s a picture I took of the right wing with some missing rivets. A few of these missing rivets may not a treat for the plane to fly but it just doesn’t give passengers a good impression and tends to show that the airline’s priority seemed to be orientated towards profit rather than security.
Here are the photos’ of the right wing and it’s missing rivets”: 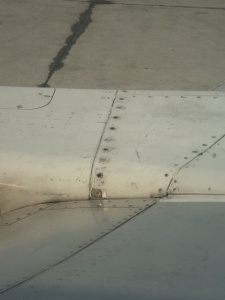 Click here to read further about the missing flight.