Bring back our girls

JUST IN: MRS. OBY EZEKWESIRI PAID BY POLITICIANS TO HIJACK #BRING BACK OUR GIRLS PROTESTS. 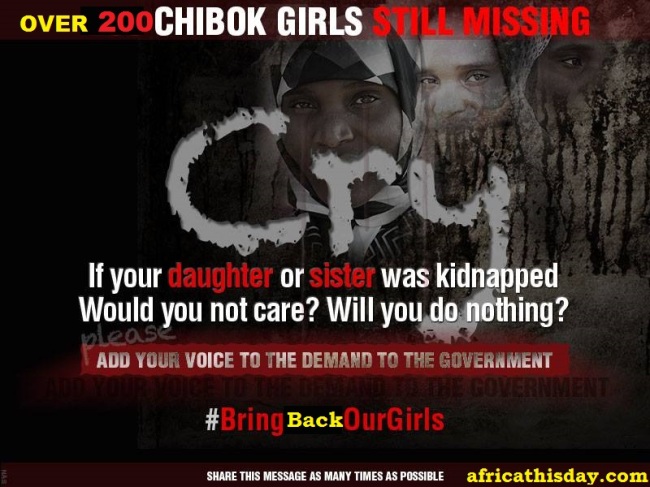 The abduction of over 200 female students in Nigeria sparked off series of local and international protests with the harsh tag #Bring Back Our Girls.
Whereas the international protests are directed mainly to the Islamic terror group, Boko Haram and to pressurize world powers to intervene in the search and rescue of the school girls; the local protest in Nigeria which is led among others by Mrs. Oby Ezekwesiri, a former minister of Education in Nigeria is directed to the President Goodluck Jonathan led Nigerian Government.
In a well reported government response to the protesters, the Nigerian government had asked them to re-direct their protests to the islamic terror group.
Already Nigerian social media commentators are accusing Mrs. Oby Ezekwesiri to have been paid by the political opponents of President Goodluck Jonathan to hijack the #Bring Back Our Girls protest for anti-Goodluck Jonathan campaigns.
A frequent social media commentator, Kingsley Ibeabuchi posted this on his facebook timeline:

“The ‪#‎Bringbackourgirls‬ protests is beginning to take political shape. Is Oby Ezekwesili not aware of the presence of foreign military aids;that’s already present in Chibok, searching for the girls? Is she dumb to the fact that, we have terror in our hands and we require unified effort,and well taught-out strategy to ensure safe rescue?
Obviously,She seem to be acting-out a script. Very soon,she will regret this. She that dines with the devil with tea-spoon will soon have her hands consumed.
One of the protesters at the yesterdays rally,asked that Mr. President should substantiate on the reality of the abduction of Chibok Girls? And my question is; is Mr. President a member of Boko Haram,is there no Governor in that State, or are there no records to show,or don’t these girls have parents?
I want to still ask this fellow;why should she join this protest, if She is not sure,any girl was abducted. Or, is it that the actual abductees, had been released? Does it mean that, maybe, every other story around these chibok saga are mere fallacy, doctored to achieve a rubbishing-political propaganda?

My happiness is that some foreign presence are involved in the search, and sooner or later the truth will float. All these Political destitutes will hide their heads in shame!”

This entry was posted in Uncategorized and tagged Boko Haram, Bring back our girls, Chibok girls, kingsley ibeabuchi, oby ezekwesiri.

#Bring Back Our Girls Goes Occultic As Traditional Hunters Get Ready For Sambisa Forest. 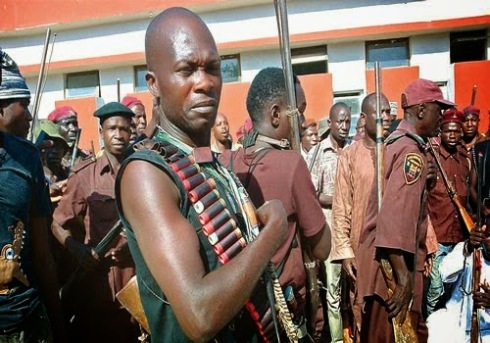 Rita Egwu – Over 500 traditional hunters armed with home made guns, poisoned spears and amulets are eager to use their black magic powers (Juju) to help find the abducted girls. Aged between 18 to 80, these traditional hunters have been waiting for the past two weeks in Bornu State to get an official approval from the Nigerian Military.
With cow horn trumpets and echoing eerie war cries that can send shivers down the spin. These men were selected by their peers for their spiritual powers twirl around and stab themselves with no apparent harm. They also have herbs and other substances wrapped in leather pouches. with cowrie shells, animal teeth and leather bracelets they say they are impenetrable to bullets. They claim they are not saying they are better than the soldiers but they are laying claim to knowing the bush better. They say they have reached the end of their patience and if the government is not ready to use them then they will disband. A social commentator said: “I believe these men have what it takes to bring back our girls. This is Africa so we have an African way of solving issues that the west and their technology can not solve. I remember the days of Bakassi boys. They used charms to reduce crime in the east of Nigeria”.

This entry was posted in Uncategorized and tagged 500 traditional hunters, Boko Haram, Bring back our girls, Chibok girls. 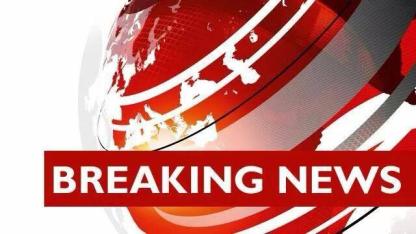 Boko Haram has sent a letter to Government College, Markurdi threatening to attack the school, the school principal, Godfrey Ugudu has said.

Ugudu, at a news conference on Saturday, May 17, 2014 said the school received two letters on May 14 which both had the same content.

He said: “It is true that we saw two letters informing us of the intention of the sect to invade our school on Friday or Monday by Boko Haram.

“The letters were dated May 14, 2014, stating that they were coming either of the two days to abduct our boys whom they would marry to the secondary school girls abducted in Chibok.

“In the letter, we were asked to inform the Mount Saint Gabriel Secondary School opposite us to also get prepared as they promised to invade the place too.’’

The school principal said the police department and commissioner of education were notified, and commended them for their prompt response.

The Government College has about 700 students of which about 500 are boarders while Mount Saint Gabriel is purely boarding.

“We immediately alerted the police and the Commissioner for Education. A report has been made to the Governor on the issue,” he added.

Ugudu said: “The two letters, which were written in pidgin English, were sighted inside one of the classrooms and the second one was slipped into the staff room.”

He assured that security checks have been done to ensure the safety of its students. The principal also said that he had informed the principal of Mount Saint Gabriel about the threat from Boko Haram.

Dan Ezeala , the police public relations Officer in the state confirmed the report and assured that the police were at high alert.

This entry was posted in Uncategorized and tagged Boko Haram, Bring back our girls, chibok. 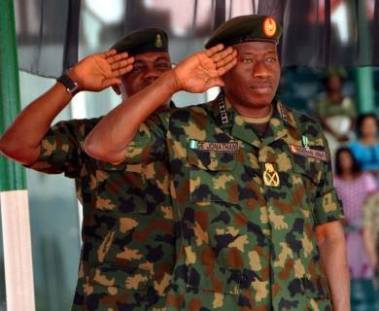 A presidential aide confirmed to PREMIUM TIMES at 12:10 p.m. today that the president will no more visit Chibok but would fly directly to France.
“President Goodluck Jonathan will no longer visit Chibok on Friday”, aides have said.

The president had planned to Chibok, the town where over 250 female students of the Government Secondary School, Chibok, Borno State were kidnapped on April 14. Many political supporters of the President had taken to the social media commending him for cancelling the proposed trip to Chibok as that would have been an opportunity for the terrorist sect to carry out what they termed “the last fight”.

This entry was posted in Uncategorized and tagged Bring back our girls, chibok. 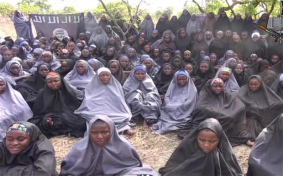 A new video released by the Boko Haram sect showed around 100 girls kidnapped from a school in Chibok, Borno State, last month.

The group’s leader, Abubakar Shekau, said the girls would be held until all imprisoned militants had been freed.

He said the girls had converted to Islam. The video, released on Monday, showed them praying.

Boko Haram abducted more than 200 girls from Chibok on April 14 and threatened to sell them.

The BBC reports that Boko Haram’s comments showed signs that the group was willing to negotiate.

Three of the girls are shown speaking in the 17-minute video, obtained by French news agency AFP, wearing the full-length hijab.

Two girls said they were Christian and have converted to Islam, while the other said she is Muslim.

“These girls, these girls you occupy yourselves with… we have indeed liberated them. These girls have become Muslims,” Abubakar Shekau said in the video.

It is thought the majority of the abducted girls are Christians, although there are a number of Muslims among them.

The BBC reports the girls appeared calm and one said that they had not been harmed.

There is no indication of when or where the video was taken.

It is estimated to show about 130 girls – just under half of the 276 pupils abducted from their school in Borno State.

This entry was posted in Uncategorized and tagged Boko Haram latest video, Bring back our girls, Chibok girls. 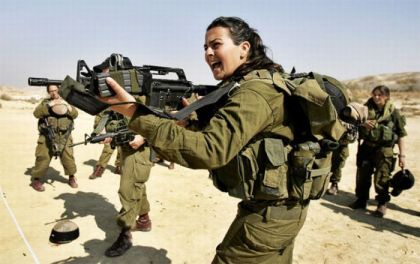 The Israeli Army have confirmed their readiness to join the search for the Kidnapped Chibok School girls and the fight against the Islamic terror group, Boko Haram in Nigeria.

A statement obtained by Africa Thisday said that Netanyahu, currently on an official visit to Japan, made the proposal in a telephone call to Nigerian President Goodluck Jonathan.

“Israel expresses its deep shock at the crime against the girls,” it quoted the premier as saying.

“We are prepared to help in locating the girls and to fight the cruel terror which has struck you.”

Boko Haram, whose name is literally translated: “Western education is forbidden” kidnapped the girls from their dormitory on April 14, and has threatened to sell them.

This entry was posted in Uncategorized and tagged Boko Haram, Bring back our girls, Chibok girls, israeli military, Netanyahu.

Chibok: The emerging and uncomfortable facts. 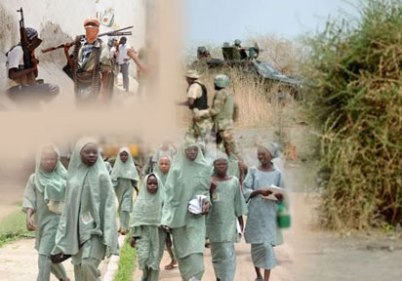 Now that the operational leadership and visible face of Boko Haram, in the person of the filth called Mr.  Abubakar Shekau (aka Darul Tawheed), has finally admitted that they were responsible for the abduction of hundreds of our school girls and that they intend to ‘’sell them in the market  like slaves’’, it is pertinent and necessary for us to consider some  of the emerging, though uncomfortable, facts.
This will enable us to understand the nature of who and what we are dealing with. Permit me to share the following facts that have been brought to my attention:

3. That the majority of the girls that either ‘’escaped’’ or were released by their abductors were Muslims.
4. That the Governor of Borno State refused to accept the counsel and abide by the directives of WAEC that the exams should not take place in Chibok due to the precarious security situation and instead he insisted that the exams should take place there and that he would guarantee the security of the children.

5. That the Christian Association of Nigeria has formally accused the Governor of Borno State of ‘’conspiracy and collusion’’ and they have urged him to tell us exactly where the girls are and what he knows about the whole incident.

6. That the girls that have been kidnapped are being raped up to 15 times a day by their captors and that those amongst them that have refused to convert to Islam are having their throats cut (read the testimony of one of the girls that ‘’escaped’’ on page 8 of the Vanguard Newspaper, 5th April, 2014).

7. That there was not a single adult in the school grounds watching over the 278 girls that entire night apart from one security man and that there was no electricity, no generator, no principal, no matron, no house master and no house mistress in the grounds with them.

8. That the children were all alone in their dormitories that night in the blistering heat and deepest darkness before the Haramites arrived to burn their school and carried them away into captivity.
9. That the soldiers that were guarding the school in Chibok were redeployed a few hours before Boko Haram launched their attack and abducted the children.

10. That up till now pictures of the abducted girls have not been produced or released by the school authorities or the state government.